An article by Zoe Taylor-Lynch, featured in The Australian Asbestos Network website.

Asbestos in the La Trobe Valley

In the early 1920’s, large-scale electricity production began in Victoria, with the establishment of the State Electricity Commission of Victoria (SECV) in 1921 and famous soldier, engineer and scholar Sir John Monash named as its head.

Located approximately 160km east of Melbourne, the Latrobe Valley, with its abundant brown coal resources and expansive agricultural land, was the ideal place to begin electricity production. The SECV carved an open-cut coal mine in Yallourn and over the next four decades built the Yallourn A, B, C, D and E power stations.

Built between the 1920’s and 1950’s was the town of Yallourn, specifically designed for the families of the SECV power station workers. According to The Yallourn Old Girls’ Association, Yallourn “boasted outstanding public facilities many years in advance of similar rural or suburban communities”. It was the first planned town in Australia and was based on the garden cities of England. Yallourn featured nicely landscaped streets bordered by trees, parks and native vegetation, and good amenities, including a cinema, schools and quality housing.

Asbestos, with its strength, durability and resistance to heat, was used quite widely at the time in household and everyday products, including asbestos cement sheets, building materials, roofing, plastics, textiles, floor tiles and clutch and break linings. To deal with the extreme heat generated in electricity production, the SECV used asbestos in a wet form for insulation around pipes in the power stations, known as lagging.

Former power industry worker Ray Harris worked in stations A, B, C, D and E from 1956 to 1962 and at Hazelwood Power Station from 1962 to 1989. In a statement he made to law firm Slater & Gordon, he describes these power stations’ usage of asbestos and asbestos related products as extensive. He also describes the lagging process and consequent dispersal of asbestos dust:

“Exposure to asbestos occurred during the construction phase of new power stations, when lagging was applied to boilers, turbines and ancillary equipment. Laggers were supplied with bags of dry asbestos, which were emptied into bins measuring approximately two metres square by one metre in depth. Water was added and the product mixed to form a paste. During this process Laggers were covered in dust and did not wear masks prior or during the mixing process. Dust dispersal was quite significant.” 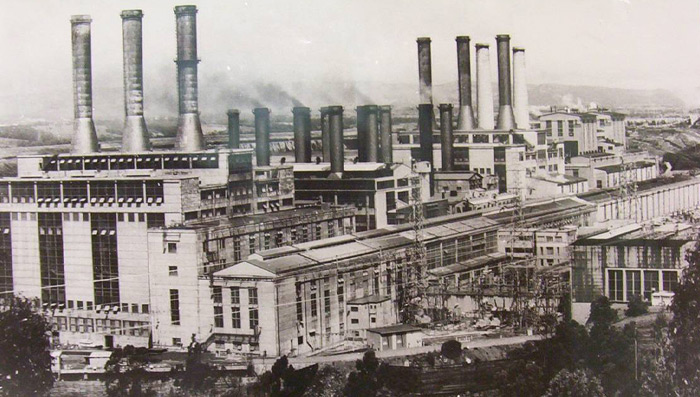 Mr Harris also notes that asbestos exposure occurred while the power stations were in operation. Steam pipe leaks resulted in further asbestos dust dispersal, and lagging where those leaks occurred had to be replaced with more of the asbestos-water mix. At no time, he said, during his 33 years of power station operations  “were warnings about asbestos given or protective gear issued to anyone.”

By the early to mid 1980s Yallourn had been bulldozed so that the SECV could mine the rich brown coal resources that lay underneath the township. The SECV’s role in supplying electricity to Victoria discontinued in 1993, when it was split into generation, transmission and distribution companies. By the mid to late 1990s these companies were further split, privatising the Victorian power industry.

Excerpt from Premier John Brumby’s apology at the regional sitting of the 56th parliament at the Monash University Gippsland campus on 15 October 2008:

“Victims of asbestos exposure deserve the right to provisional damages and they deserve an apology. With that in mind I want to take this opportunity today to acknowledge an injury that has been ignored for too long. On behalf of the Victorian government and the community I want to say sorry and to express our regret for the pain and the suffering felt by some former power industry workers and their families where that was caused by asbestos exposure at the former SECV. Some workers and families have endured intolerable suffering, including the slow and painful effects of lung cancer, asbestosis and mesothelioma. The government sincerely apologises to these workers and their families for the injuries caused by the exposure at the SECV.

Victoria banned the use of asbestos in 2003, but we understand that some former workers and their families, through going about their daily work, are still suffering the impact of asbestos exposure.

It is unacceptable that any person, through the course of their work, is exposed to what we now know is a deadly substance. I hope this apology goes some way to bringing closure and resolution for families who are suffering from asbestos-related diseases.”