Where is Asbestos hiding outside my house?

Time to walk around your own home and look a little closer!

Typical locations for the most common asbestos containing materials around the home. 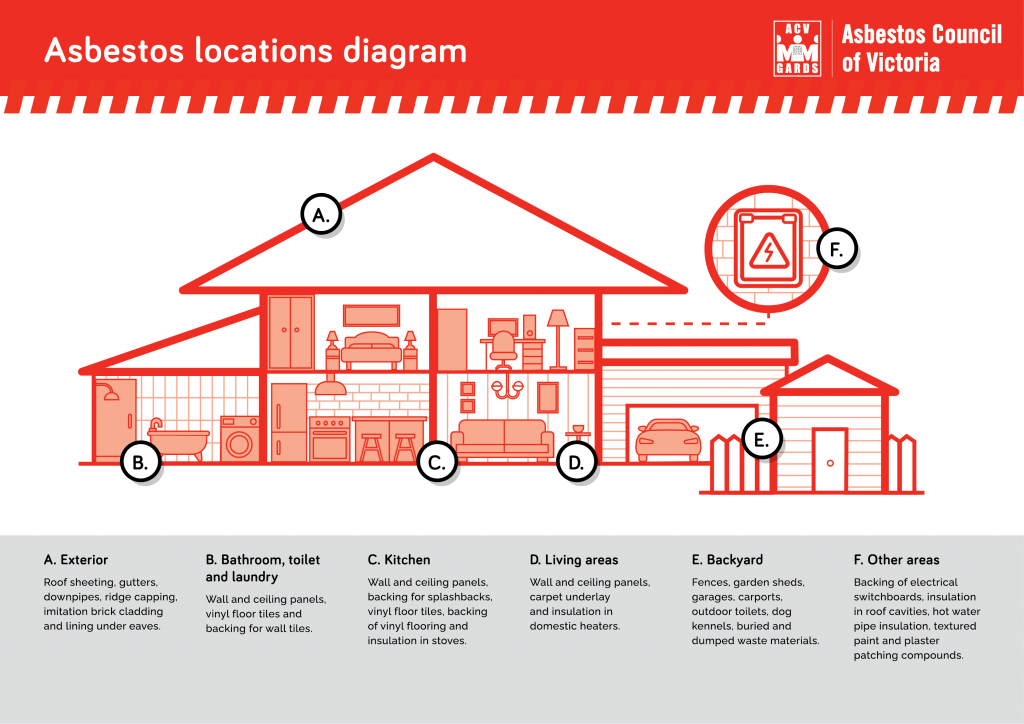 Let’s start with the roof. The obvious place to begin is the roof sheeting. Corrugated asbestos cement roof sheeting is very common. These days most people refer to it as ‘Super 6’ roofing although it did have other names. 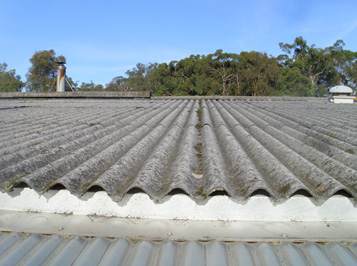 Most Super 6 roofs were left unpainted and therefore they will normally be in average condition with obvious signs of weathering and lichen.  DO NOT use a high pressure water jet to clean them – it will blast asbestos all over the place and may leave you with an enormous clean-up bill.

Because Asbestos Cement sheet products were so versatile, they were moulded into many shapes and were also used on the roof as ridge capping (seen in the background of the roof picture) and also as edge capping (as seen in the next pictures). 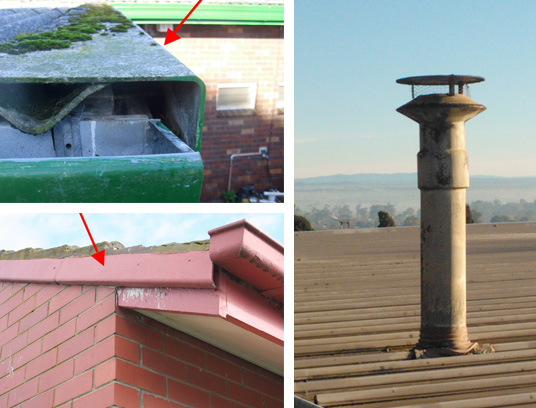 Also up on the roof you may have flues for internal heaters or hot water boilers. These were commonly made of AC pipe and many had the moulded AC ‘Chinaman’s hat’ at the top.

These were quite often left in place after the heater was removed. It was also common to leave the rest of the flue lying loose in the ceiling cavity instead of disposing of it correctly.

It is also possible to have AC guttering and downpipes, although this was more common in industrial buildings.

When sealing the end of a tile roof, mortar is placed between the tiles and Fascia boards. To stop the mortar from just falling in to the cavity above the eaves a length AC Sheet would be inserted first. This helped the mortar stay in place to ensure a good seal. 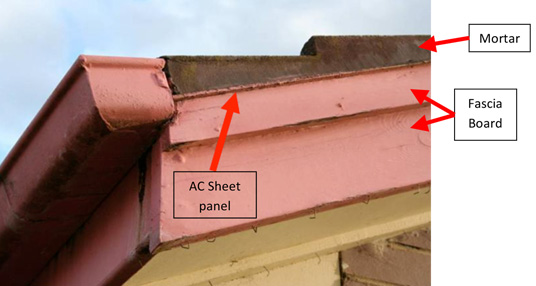 So working down just a little further we come accross all types and varieties of ‘Gables’ and ‘Infills’. This covers just about anywhere where they needed to fill in a gap between different building products.  Due to its strength and weather durability, AC Sheet was a favourite for such areas. Timber and cement sheet are also very common in these locations.

Gables are located at the ends of the roof line and in locations where the roof height or pitch has a change.

Infills are commonly found above and below windows and doors. 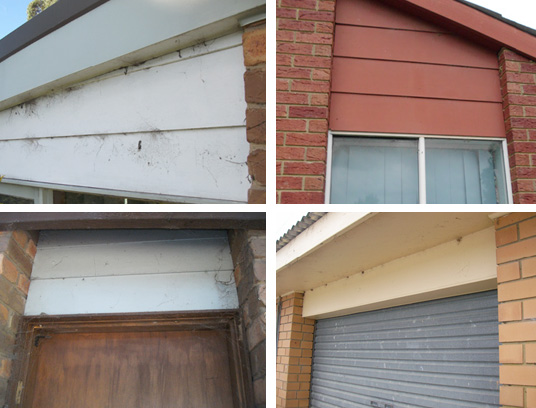 Be on the look out for those sneaky ‘after thoughts’ too.  Like in the photo below, it is not at all uncommon to find little (and large) ‘patchwork’ repairs and modifications. 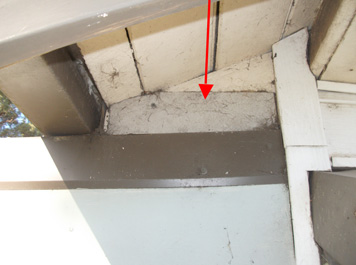 Do you notice the cover straps used over the joins?  This can be a good hint that the panels may be AC Sheet.  This is NOT a rule however, as clearly shown with the ceiling photos above where the one on the left is AC Sheet but the one on the right is not.

Another ‘alert’ to keep an eye out for is when the nail head is sitting on top of the sheet (not indented into the surface).  The AC Sheets are VERY strong and would not even dint when the hammer hit it directly.

As you can see below, our sneaky repair person is back again!  It’s subtle but at least it hasn’t been painted – sometimes, when it’s all been painted, all you can do is be on the lookout for different shapes or changes in texture.  There are clearly two different products that would need to be identified in this section of the eaves. 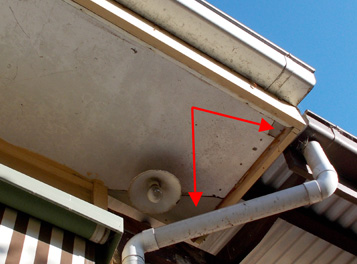 The photo below shows a style of eaves that you don’t see very often.  This particular one IS asbestos.  If you have eaves similar to these it would be a good idea to take caution and have them tested to confirm if they are or are not. 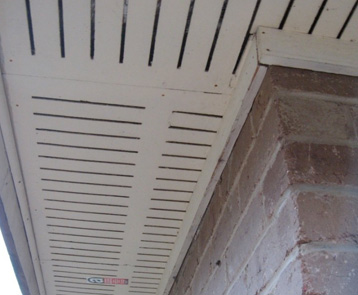 So let’s move on down to the external walls of the house.  Is your house brick, weatherboard, cement sheet, Colour Bond or something else altogether?  We’ll start with the products that were more commonly asbestos then work our way through to some of the sneakier and surprising locations that it can be found.

Here are some commonly used names for different types of cladding; WeatherTex, Colorbond, Vinyl, Weatherboard, Hardiplank, Fibrolite.  Although some cladding is easy to define as ‘non asbestos’ we need to be sure that it has not been installed over the top of another product.  See if you can find an area that allows you to see behind the cladding – the results may be surprising!

The photos below show the types of materials that would attract further investigation.

The upper walls on this one below were AC Sheet. 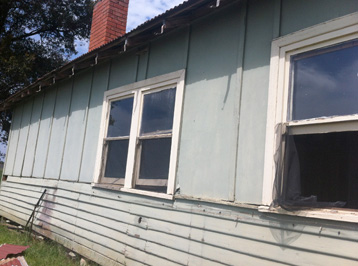 From these photos I would be inspecting if these are timber, vinyl or cement sheet based panels and if they have been installed over the top of another product.

From a distance these cladding styles could almost appear to be a metal base.  On closer inspection, however, these two proved to be moulded asbestos panels. 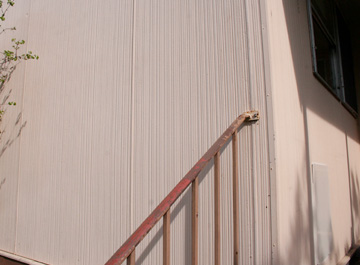 This photo is an example of ‘External Asbestos Textured Wall Sheeting’.  They really could mould asbestos into any shape and anything!

Some styles of the Faux Bricks were attached to the AC Sheet and other styles were a fully moulded sheet.  The photo below shows a sample of faux brick adhered to an AC Sheet.

But you can’t stop with faux brick, what about crazy stone features! 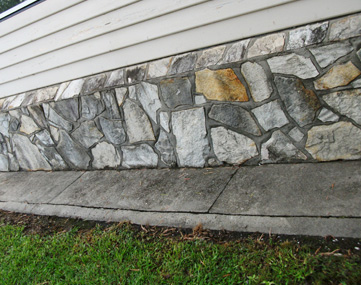 While we are on bricks… did you know that a type of Asbestos Mastic was sometimes used in expansion joints!  It doesn’t stop there either, Asbestos Putty was also used for windows at times (not restricted to brick houses) photo of putty debris below right.

Another surprise that can be found with a brick home is with the subfloor air vents.  AC Sheet was used to bridge the gap between the bricks as shown in the photos below.

Then we move on to cover strips. These can be asbestos too.

So what about the Switchboard?  This was yet another area where asbestos was utilised for backing boards and insulation.  AC Sheet was used for the switchboard surround or at times to line it.

Zelemite was a common product used; black in colour and at times can have a ‘tar’ like smell.  Quite often there is also Asbestos Millboard behind and around inside edges of the Zelemite board/box.  Millboard is very similar to blotting paper material and IS FRIABLE – DO NOT DISTURB and, if possible, seal any external access points off.  Another product that was used (quite rare to find now) was a Fuse Blanket. 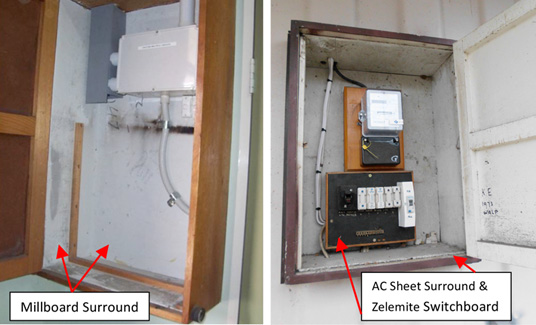 In a nutshell, Electricity is dangerous and we should not be disrupting the switchboard without a qualified Electrician!

Now, what’s under the house?

There are a few common offenders to be on the lookout for under here. Debris, Formwork (for heater bases, concrete stairs, etc) and Stump Packers. Some examples of these are shown in the photos below.

Random debris under the house can often be surprising!

AC Sheet was another favourite for Stump Packers too.

Formwork (board used to mould/barrier building products, often concrete) is often easier to see from under the house.  Common areas to find this are below heaters in the house and behind concrete slabs and steps leading to and around the house.

Now let’s take a look around the yard… 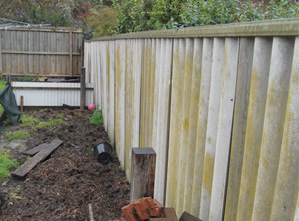 What is your fence made of?  Do you still have an asbestos ‘Super 6’ fence complete with asbestos capping?

After checking the main materials of your shed structure, don’t forget to check what that old tool ‘Shadow Board’ is made from.  Most of the time, like in the photo below, it will be Masonite (rich brown in colour) but there are still some old grey asbestos ones hiding out! 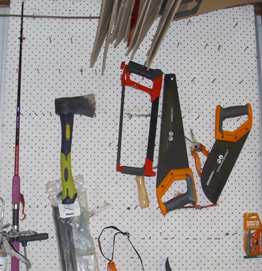 A few more suspects that have been found can be hiding in the garden or unnoticed underfoot. 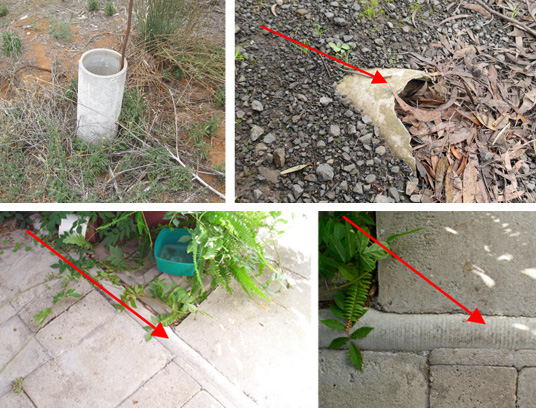 Find asbestos inside your home

Next, see where you may find asbestos inside your home.

Thank you to Mairin OHS&E for providing this information for us. You can find out more about Mairin OHS&E at their website www.mairin.net.au