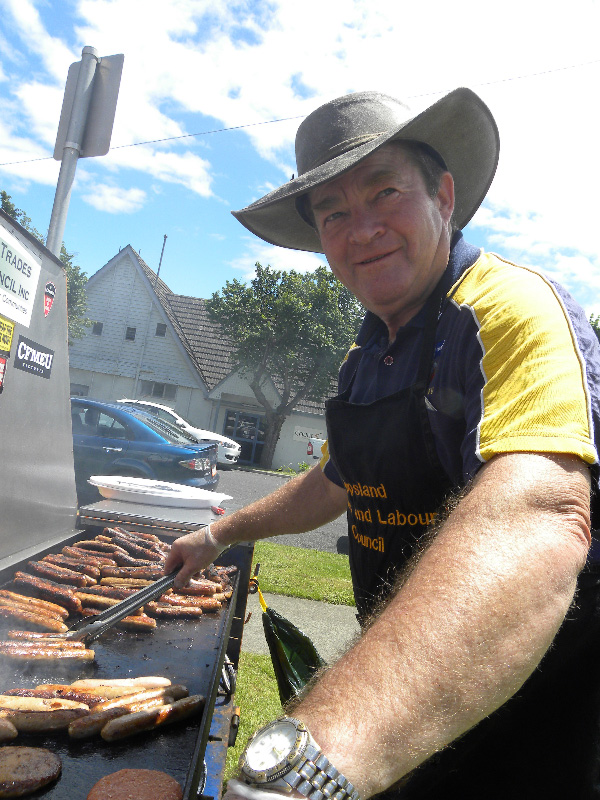 I and the ACV/GARDS organisation feel very honoured and privileged to have worked alongside him – I personally became very close to John and he was like the big brother I never had. A good friend that I adored and loved. John was our Treasurer on the committee of ACV/GARDS for 4 years and he was made a Life Member of our Association in March of this year, to show how much he meant to us all.

I first met John when he came to the Valley to head up the Gippsland Trades and Labour Council – I viewed John with some scepticism as our relationship with unions at that point had not been all that flash and we were not trusting of many people and associations. In fact you might say we were very GARDED – excuse the pun!

He held the hand of friendship out and said that the GTLC wanted to work hand in glove with community groups like ours to make Gippsland a better place for all. I am so glad that we took that plunge with him and the trust and bond that grew up from that point onwards became links in a chain that has now spanned more than a decade and so many issues.

I was always ringing John up for his opinion on asbestos situations as we were dealing with them on a day to day basis from the community. John’s opinions and the wealth of knowledge that John had taught me so much- I was an integration aide working at Newborough Primary School when I first met him and I was trying to juggle my work commitments with the demand on us from the community to help with all things Asbestos – as most of you here would know now – this was a mammoth job on its own. John inspired me to be the very best advocate I could be for asbestos sufferers and their families. He reassured me and supported me when those in the community were not so supportive of the work our organisation was trying to achieve for sufferers and their families. Thank goodness times have gotten better in recent years around support from the community and starting to understand the issues that our area and the nation face into the future – he helped us wherever he could and joined us in meetings with whomever it took to make change. He was our rock and if anyone dared to down us John was there to stand up for us. A truly great CFMEU organiser – one of the best – some of John’s sayings to me included  he was the feather duster not the rooster – lets go deal with those who can make the change – another of his sayings was I am just the oily rag not the engine driver – lets go see who can take this forward for us. He had a wonderful ability to clear away the bullshit so the problem could be seen clearly by everyone. He empowered so many people and organisations to deal with their problems and make change for the better. This is a great legacy he has left Gippsland with a very big foot print on all of us.

John never crowed about his achievements – but he derived so much satisfaction knowing that he had helped to bring about that change.

I know that all the ACV/GARDS members join with me in saying the world has lost a truly special person who will be sadly missed by all of us. He was a visionary, an honest bloke who told it like it is, selfless, caring and compassionate for his fellow human being, he was always trying to right the wrongs of others – man of integrity and a sense of justice compared to none. A true community leader that we admired greatly. He was a warm, gentle and a passionate fighter for Gippsland workers and their families. He use to call himself the scrapper! – because he never shied away from a battle if that is what it took.

He had many sides to his very being – he was like an onion that you could peel back the layers on and if you were lucky enough to be close to John some of John’s other interest shone through such as his love for wood and the carving he did with just the right piece of wood that he would go out and scout for and some here today may have had the privilege to see him carving and the wonderful things he created with his magic hands and keen eye  – his love of painting – and the magic he created on canvas  – his interest and love of rock collecting that he was passionate about – maybe something that you did not know was John could knit, sew and do needle point – for a tuff union organiser the inner layers of this onion would astound you. He was a true gentleman and he has left Gippsland with a wonderful legacy of all that he has loved and been involved in – it is up to us to keep up the standard John has set.

Again lastly I want to thank Alison and her family for sharing the truly amazing man we called John, Friend, mate and comrade with us – we are so grateful to the Parker family for allowing us to have our piece of John Parker to keep and remember. We had some laughs along the way and many cherished memories to go over in our minds and I know I will always look back on the times I had with John and cherish them.